With an expert team working with our neurological community specialist nurse, Saint Michael’s is able to provide practical and emotional support for people living with illnesses such as Motor Neurone Disease. Here, David Umpleby, diagnosed with MND 4 years ago, and his daughter Susan reflect on the care and support they are receiving from Saint Michael’s. 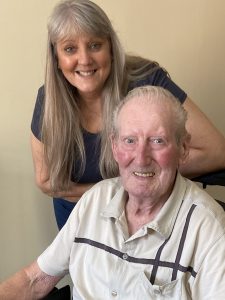 Born in Darley, at the age of 15, David Umpleby took off for a long and illustrious career in the RAF, serving all over the world before meeting his future wife, auxiliary nurse Lily in 1960.

A chance encounter at a local dance led to a whirlwind courtship, marriage, the birth of their daughter Susan and 53 happy years together.

With David serving in the RAF, the family lived all over the Europe before returning to Harrogate in 1980, before retiring in 1993.

In 2014 Lily sadly died, and in the same year, David was diagnosed with Motor Neurone Disease. “I had not been feeling 100% but pushed aside my symptoms to focus on caring for Lily” he said.

When his speech started to deteriorate, David thought it was because of a fall he had had. Eventually his GP sent him to a neurologist who gave David the diagnosis he had been waiting for. “I was ready for the diagnosis,” said David. “I am a positive person and this is what has been dealt to me, so I will just deal with it.”

The neurologist referred David to Saint Michael’s for support from our neurological community specialist nurse.

“She really understood what I was going through,” said David. “Although no-one with MND has exactly the same symptoms, the Saint Michael’s team had so much experience to help us. “

Susan and David have attended outpatient support provided by Saint Michael’s for patients living with MND and their families.

“It was a really bonding experience,” said Susan. “We were able to spend quality time together, doing activities like painting and pottery. It was really positive.”

She added: “Saint Michael’s has been wonderful at supporting us with practical things too, like accessing specialist equipment – for example a stairlift, a wheelchair and a riser recliner chair, really quickly. Having that support makes everything so much easier.”

And when Susan had to have a small operation, David was able to go into the hospice for a week to be cared for.

“It was excellent, said David. “I had a lovely room with a beautiful view and I really enjoyed the company, playing dominos with the staff. I didn’t have to worry about anything. I knew I was safe.”

This care also took away some of the stress for Susan, knowing her dad was in good hands and his condition managed.

David added: “Although life has become more difficult as both my speech and mobility deteriorate, I stay positive and cheerful and refuse to give up. I do hope the doctors and research scientists will find a successful cure for Motor Neurone Disease one day soon.”

Our shops are looking for donations

Have you received gifts this Christmas which could be lov...

Sign up for regular updates
We use cookies on our website to give you the most relevant experience by remembering your preferences and repeat visits. By clicking “Accept All”, you consent to the use of ALL the cookies. However you may visit Cookie Settings to provide a controlled consent.
Read More
ACCEPT ALLCookie settings
Manage consent

This website uses cookies to improve your experience while you navigate through the website. Out of these cookies, the cookies that are categorized as necessary are stored on your browser as they are essential for the working of basic functionalities of the website. We also use third-party cookies that help us analyze and understand how you use this website. These cookies will be stored in your browser only with your consent. You also have the option to opt-out of these cookies. But opting out of some of these cookies may have an effect on your browsing experience.
Necessary Always Enabled
Necessary cookies are absolutely essential for the website to function properly. These cookies ensure basic functionalities and security features of the website, anonymously.
Functional
Functional cookies help to perform certain functionalities like sharing the content of the website on social media platforms, collect feedbacks, and other third-party features.
Performance
Performance cookies are used to understand and analyze the key performance indexes of the website which helps in delivering a better user experience for the visitors.
Analytics
Analytical cookies are used to understand how visitors interact with the website. These cookies help provide information on metrics the number of visitors, bounce rate, traffic source, etc.
Advertisement
Advertisement cookies are used to provide visitors with relevant ads and marketing campaigns. These cookies track visitors across websites and collect information to provide customized ads.
Others
Other uncategorized cookies are those that are being analyzed and have not been classified into a category as yet.
Save & Accept
Powered by