An international rugby commentator, journalist and former Olympic 400m hurdler is paying tribute to the Yorkshire hospice who cared for his mother.

An international rugby commentator, journalist and former Olympic 400m hurdler is paying tribute to the Yorkshire hospice who cared for his mother.

Martin Gillingham, who will be commentating for several of the world’s leading international television broadcasters on England’s series of Rugby Internationals this November, is highlighting the importance of local hospice care while remembering the support that his mother, Averil, received from Harrogate-based Saint Michael’s Hospice, before her death from Thyroid Cancer in 2018.

Martin is perhaps best known for having commentated on the last three Rugby World Cups for ITV. He is also a familiar voice on BT Sport and their coverage of English and European club rugby.  In his youth, Martin competed in the 400 metres hurdles at the 1984 Olympic Games and 1987 World Championships representing Great Britain.

Remembering his mother, Martin said: “Averil was a force of nature. Independent, courageous and forthright, yet deeply caring and lots of fun. 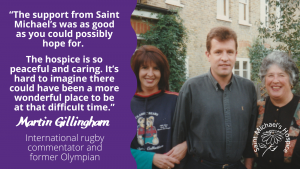 “A professional Yorkshire woman, she had an indomitable spirit.”

After her condition progressed, Averil spent her final weeks at Saint Michael’s Crimple House Hospice. She grew up in Leeds and, after spending a significant amount of her working life with her late husband in the south of England, returned to her Yorkshire roots to live her retirement in the Harrogate area.

Martin said: “My mother was looked after on the Inpatient Unit in a room with a view straight over the viaduct.

“When the time came, the support from Saint Michael’s was as good as you could possibly hope for. The hospice is so peaceful and caring. It’s hard to imagine there could have been a more wonderful place to be at that difficult time.”

For Martin, clear communication with the hospice care team proved vital. He said: “For me, it was important to have honest conversations with the clinicians about how my mother was doing. What I really appreciated was the way in which the team helped to prepare me for her death by sensitively but frankly explaining how she was.”

Saint Michael’s provides care from its Crimple House Hospice, based in Hornbeam Park, Harrogate and out in the community in the place people call home.

Across its family of services, 70% of the £7 million needed to support people living with terminal illness and bereavement in North Yorkshire every year is reliant on the generosity of the local community.

Martin said: “Saint Michael’s is clearly at the heart of the community and is such an important, if not the greatest, local cause.

“We miss my mother Averil terribly, but look back with gratitude and appreciation of Saint Michael’s care.”

To find out more about Saint Michael’s, its services and how you can support, visit www.saintmichaelshospice.org

Join us to celebrate memories of loved ones, while suppor...

We’re so grateful to our amazing fundraisers for hostin...

It’s lovely to hear from many individuals in our commun...