Supporter Patrick Busby is preparing to take on a charity cycle race in tribute to his sports-loving brother, who had a long and successful broadcasting career at the BBC.

Patrick is taking on the 53-mile South Downs Tour cycle race this Saturday (July 3) to raise money for Saint Michael’s in memory of his brother Dom. Dom was diagnosed with an aggressive brain tumour just two months before his death, aged 53. He spent his final three weeks at Saint Michael’s; in the town where he grew up and began his radio career.

Dom worked for BBC local radio stations across the country, as well as BBC Radio 5 Live and BBC Radio 4.

Patrick said “During the final stages of his illness, the amazing staff at Saint Michael’s looked after Dom with great care and compassion. I am thankful for this wonderful institution who make such a difference to families at their times of greatest need.

“With Dom’s passion for sport, it seemed fitting to do a cycling challenge in tribute to him. On Saturday 3rd July, I will take part in the South Downs Tour 85km (53 miles) cycle race to raise money for Saint Michael’s Hospice.”

The route will see Patrick take on the challenging hilly terrain of the South Downs National Park, which is an Area of Outstanding Natural Beauty.

“During the final stages of his illness, the amazing staff at Saint Michael’s looked atter Dom with great care and compassion. I am thankful for this wonderful institution who make such a difference to families at their times of greatest need."

Chief Executive of Saint Michael’s Hospice Tony Collins said: “We are incredibly grateful that Patrick has chosen to support our vital work with a meaningful and fitting challenge in tribute to Dom. 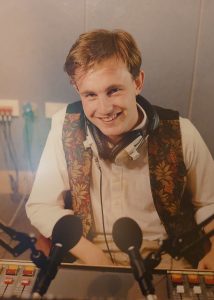 “Thanks to so many supporting this very special event, Patrick’s cycle challenge has already exceeded its target and continues to see generous donations being made in Dom’s memory. All gifts in support of Patrick’s efforts make a huge difference to local people living with terminal illness and bereavement, as well as their families.”

Christopher Busby, another brother of Dom’s, said: “Saint Michael’s Hospice is in a most beautiful setting, with a calming and tranquil environment. The staff go above and beyond the call of duty in regard to patient and relative care, and nothing is too much trouble. The love and compassion is of the highest level.”

If you wish to support Patrick’s challenge, you can do so by clicking here.

All at Saint Michael’s would like to wish Patrick the best of luck with his challenge and thank him for his wonderful support.

Just 'B' is our specialist bereavement and emotional well...

A Knaresborough family has shared the poignancy and comfo...

Some tips, and resources to help you be kind to your mind...